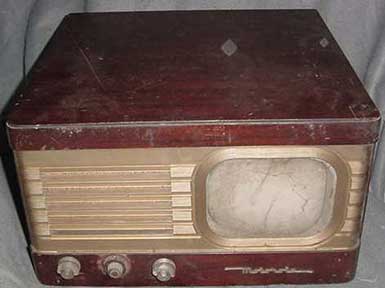 Electrostatic sets use voltage across plates inside the picture tube to sweep the electron beam across the face of the screen, standard CRT sets use electromagnets mounted on the outside of the tube neck to do the same thing.

I have several of these sets, this picture is typical of their condition as found, basically intact but in serious need of some TLC. Click on the top picture to see a video of this now restored set in operation. 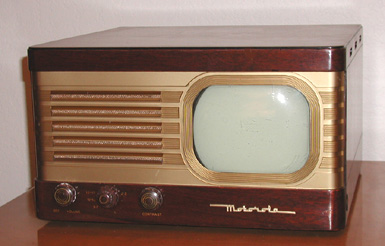 The set after restoration 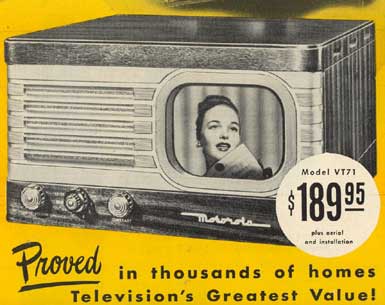 Electrostatic sets were cheaper to build and allowed manufacturers to fill a need for low priced TV's.
Motorolas like this sold for less than $200 at a time when a conventional 10" set might be $300 or more. They sold a zillion of them and they are one of the most common 1940's sets you can find today. 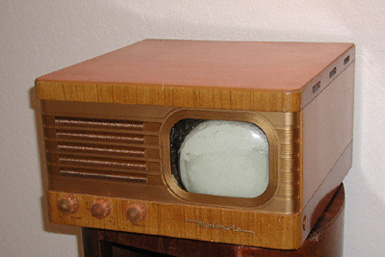 This is the same set in the harder to find Blond finish. This one is also an earlier model (probably 1948 but the date stamp is illegible) with channel one on the tuner.
This set is unrestored and like most of these sets the rubber gasket that supports the picture tube had deteriorated and melted all over the face of the tube and the back of the plastic faceplate, it took quite a bit of careful cleaning to get it off the plastic part without any damage. 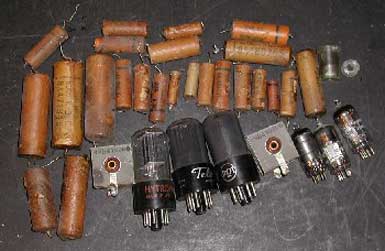 This is a picture of some of the parts that were replaced. This set, like all 50+ year old TV's had to be rebuilt in order to function properly. This entails replacing all the paper and electrolytic capacitors, replacing the Selenium rectifiers with Silicon Diodes, checking all the tubes and replacing any that are weak or shorted. I had to refinish the cabinet and replace the picture tube as well.