Every product needs a gimmick and for Hoffman that was a yellowish-green tinted safety glass placed in front of the screen and cleverly called "Easy Vision".
Many people found it annoying, like watching TV with your sunglasses on.
Note the vertical dial on the front, this set also has an AM/FM radio. 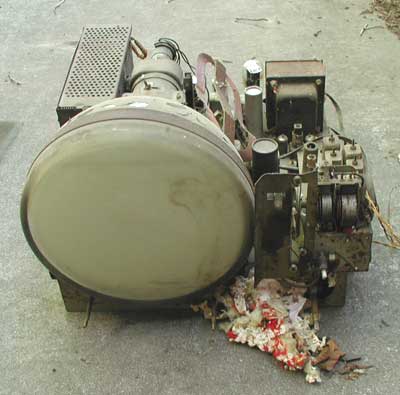 This set had been lived in by a Mouse at some point, the debris in front of the set was his nest!

The chassis was quite dirty as well. When a set is this bad off I sometimes resort to cleaning it with soap and water.

In this case I scrubbed everything except the power transformer because it would be difficult to get all the moisture out of that.
Everything else including the Flyback transformer got a good cleaning followed by a half hour in the oven on the "Warm" setting. About 150 degrees or so after which all the controls get sprayed with De-Oxit and lubricated with light oil.
It came out pretty nice! 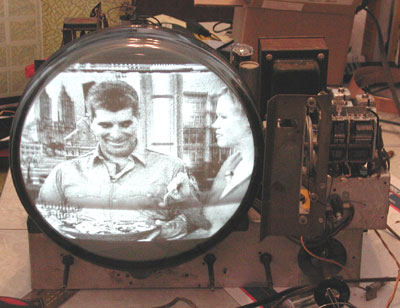 The chassis has had all the electrolytic and paper capacitors replaced.
The original 12QP4 picture tube was pretty much worn out but I was able to obtain a 12LP4 that was in great shape.
This set has a remarkably good picture! It's a shame to have to hide it behind that awful green glass but authenticity demands keeping the tinted screen :)
(note: the dark bar on the screen is a camera effect)

I am working on refinishing the cabinet which was in equally bad shape, I hate doing cabinet work and as usual it has turned into a year long project!