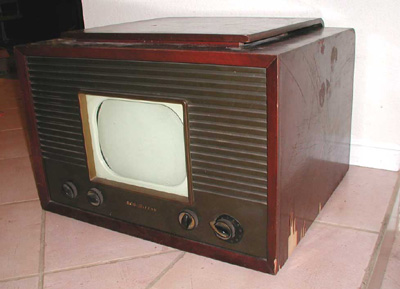 It is a back-breaker, it must weigh 80 pounds!

As always the first thing I did after bringing the set home was to check the CRT, It was a little weak at first but came up to the good range after heating up for a few minutes. This is fairly common for a tube that hasn't been lit for several decades.

I came across this service tag attached to the wiring inside the set, it is dated 9/27/1956, the technician's name was Mc Nulty. There is a W.63rd St address listed too but the city is unknown.
This set has a burned up power transformer, most likely a filter capacitor shorted out because the 5U4 rectifier tube was blown out too.
(This is why you should NEVER "just plug in" a vintage piece of electronic gear!)
Someone must have been witness to a dramatic display of smoke and sparks when this thing went! 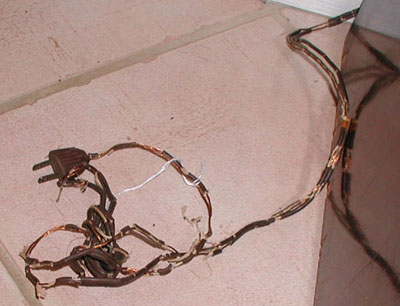 From the looks of this cord I wonder if the set has been used since 1956, possibly it went in for service but was never fixed due to the severe nature of the failure.

A friend has sent me an entire chassis from an 8-T-241,this is the same chassis as the 243 and I can use it to replace the chassis in this set rather than changing the transformer.